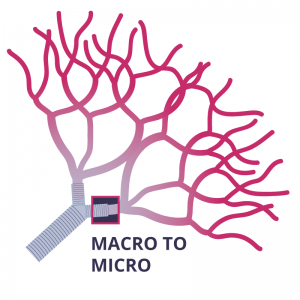 While the fabrication of a self-assembled network of capillaries and an engineered macro-network is not trivial but possible, the connection between the two is a real challenge. “The macro-to-micro connection proposed by B2B is truly innovative and, to the best of our knowledge, it’s the first time that it would be implemented” explains Andrea Banfi, leader of the related work package in B2B. The distinguishing factor of B2B, and the one that brings most of the complexity, is the size of the involved tissues, which require an extensive network of capillaries to penetrate the whole mass (range of cm3). In other techniques, such as the so-called “organ-on-a-chip” only a few thousand cells of each kind communicate with each other  – so, the connecting system is greatly simplified.

“An extended network of capillaries is harder to reproduce because its development and final arrangement is linked to conditions evolving in the different micro-environments of the organoid, which cannot be precisely anticipated”, says Banfi, “To reproduce the real organ-level-complexity we should let this randomness take place.”

That’s why in B2B the functional connection between the micro- and macro-networks is built by spontaneous processes that rely on the normal biological behavior of endothelial cells and fluid flow. The endothelial cells that cover the engineered vase and the ones that form the capillaries should first recognize each other, then stick together and finally create a junction with a lumen. For this to happen, “we include in the micro-environment the right biological signals, e.g. growth factors and morphogens, to trigger the cascade of events leading to vessel assembly. Similarly, once connections are established, the fluid flow should naturally regulate and remodel the shape and size of the vascular network.” Overall, this spontaneous connection should not take more than a few days.

After the 1st part of the project, everything is ready to test this critical kiss: the set-up for the micro- and macro-networks have been identified and it’s time to place them together and let the system evolve. The first tests will provide useful feedback to fine-tune the two networks and ensure their compatibility.